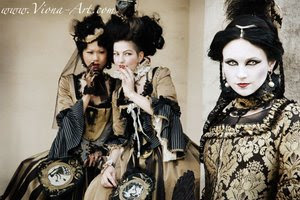 These days, I tend to sit down more with the other mothers in my girl's kindergarten, and its been quite an experience I must say. Most of the ladies in this circle of mothers are much older to me but our eldest are classmates.
Our conversations at days can be pretty silly and serious depending on what we have to share with each other. Most of the time its trashing other people and honestly I don't know why.
I suppose alot of us bottle up too much in ourselves that when we do get to bring it out it comes out in the form of condemning others, then there are also people who think so mighty of themselves that they assume they have the rights to do so. Talking about the way other people dress, walk, talk, drive, name it, in any topic it may be, there is some trashing done.
Today I couldn't help but voice out in defense of the one being trashed.
A mother who dresses up obnoxiously with cleavage revealing tops and seriously mind blowing clothes which in many ways doesn't suit her nor the venue. Apparently she was laughed at by these mothers once and she stood up for herself to tell these ladies off, and as always no likes being 'told off' that they decided to share this horrifying event with me. Well to me, I do agree with both sides, I personally feel her sense of dressing is inappropriate, but that's about it. In no way should she be condemned for defending herself and be called bossy, defensive, or deprived of control at home, etc as excuses for the defense she took for herself from this laughing vultures. What is even amazing is that this woman still talks to these mothers and I see that as admirable. If I had to be sarcastically told off by women who laughed at me, I would certainly keep them out of my sight!
"If you don't have anything nice to say, then don't say anything." This is what the lady told them when she caught them laughing at her overly sexy outfit couple of weeks ago. I think its pretty much true when its got to do with someone who's not closest to your heart. I don't believe in not saying what I need to say to people who respect my opinion and are close to me when it comes to fashion at least.
So the question is this, when do we grow up? When do we stop labelling others and trashing the ones around you? How do we get the ones around us to realise, you have passed the age for this and you need to show some form of wisdom in yourself. The more we carry on with such attitude the more we teach our kids its fine to be rotten this way. Just because we can doesn't mean we have to.
I think I tried to make that difference today. I asked them to stop scrutinizing her more than they should. It was just her dressing they all had an issue about, and yes they were rude to laugh at her, and yes she had the right to tell them off, and yes she also had the right to defend herself when not only they laughed but verbally defended themselves by condemning her directly at her face.
So once again, when do we grow up? It's a very subjective question but I suppose its not the age that holds the answer, but in the will of an individual to make that change!
at July 06, 2009