It's my Birthday today and WOW I am 33!
Honestly I look forward to seeing that number in my age get bigger in the most glorious of ways.
But what I actually want to write about is how this number '3' has become so part of my life.
So what can I say, oh glorious 3.
I am certain that when we do get our next car, I would suggest to my husband to get the registration number as 3 or 333 (symbolising our kids!) or may be even 3333 (which all 5 of us!)

"We turn not older with years, but newer every day" ~ Emily Dickinson
at February 28, 2010

I don't know about the other parents out there, but I am totally freaking out to the thought of my little girl going to Standard 1 (Std 1) next year. Why? No not because of the toilet and the canteen, but the Bahasa Malaysia (BM) subject! Although I must say the toilet and canteen situation will kick me in the head when I actually do send her off to Std 1.

How did we do it?
How did we go to Std 1 and had no trouble to pick up that language?
Was it because we had an easier syllabus then or was it because we all actually played with Malay kids in the field that allowed us to speak the language because Malay kids those days spoke more Malay than they themselves do these days?

I have been looking through the books for Bahasa Malaysia Std 1 KBSR, and OMG is the book for real ha?

I don't remember having to answer comprehension questions like those when I was in Std 1 back in 1984! The stuff our kids are doing now, I believe I only did them in Std 3!

I know of some children who are already in Std 6 and still have a difficult time grasping the subject and language. WHY?

Don't they read enough Malay books?
Don't they speak enough Malay in school because everyone is so bothered to speak in English?
Are our kids these days living their school years in a made believe state? Do they think they are in some High School Musical Version of Malaysian School?
Or is the subject simply introduced wrongly to them at Standard 1?

I just hope whatever I am doing with my daughter now, will help her pick up some BM to at least pass in her exams ( I hate having to say this because I sincerely believe one should not study for exam sake but for knowledge reason!) till she is old enough to appreciate the language herself and make her own initiative to grasp it.

Seriously, someone should re look into this subject because somehow I gather that the difficulty is not racial oriented. I think a lot of kids who do speak that language are also having a though time with the subject.

Around the block of our Music School in Sri Petaling, there is a homeless man who lurks around with the worst stink of cheap alcohol and no shower. He walks with only his torn and tattered pants and his hair and face can give any kid the fright of his life.


That is exactly what I did to my son! I introduced him to the biggest fright of his life.


Yes I know it sounds bad, but if you hear me out, I hope you would think otherwise.
My son, who has been off his diapers for almost a year, like many little boys just loves to stand around holding his little winky for no apparent reason! I have asked him if he thinks his winky was going to fall off which is why he keeps holding it? He laughs and to all my tries I have failed to make him stop doing it! It's really embarrassing especially in public. Then again, this is a common thing boys his age do, but he's my son and I don't want him doing it!
So I did, what I thought was right and has helped so far.. I told him that KAKA MAN catches boys who hold their winky around and that KAKA MAN also will catch and eat boys who cry for no reason! He can hear and smell and sense the holding of a winky by a little boy!


Yes he cried and cried but stopped when I mentioned KAKA MAN can hear little boys crying!
So far he hasn't held his winky.. and I hope he never does!


I don't think I'm bad.. I can't help that man either, he seems beyond repair, so let me help my son to get rid of something I can't stand watching any more!
at February 27, 2010 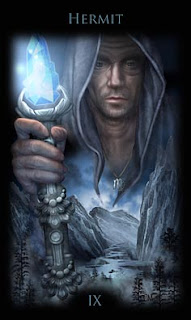 Basic Tarot Story
After a long and busy lifetime, building, creating, loving, hating, fighting, compromising, failing, succeeding, the Fool feels a profound need to retreat. In a small, rustic home deep in the woods, he hides, reading, cleaning, organizing, resting or just thinking. But every night at dusk he heads out, traveling across the bare, autumnal landscape. He carries only a staff and a lantern.
It is during these restless walks from dusk till dawn, peering at and examining whatever takes his fancy, that he sees and realizes things he's missed, about himself and the world. It is as if the secret corners in his head were being slowly illuminated; corners he never knew existed. In a way, he has become the Fool again; as in the beginning, he goes wherever inspiration leads him. But as the Fool, his staff rested on his shoulder, carrying unseen his pack. The Fool was like the pack, whatever it was he could be was wrapped up, unknown. The Hermit's staff leans out before him, not behind. And it carries a lantern, not a pack. The Hermit is like the lantern, illuminated from within by all he is.
Basic Tarot Meaning
Represented by Virgo, the Hermit is a card of introspection, analysis and, well, virginity. This is not a time for socializing; the card indicates, instead, a desire for peace and solitude. Nor is it a time for action, discussion or decisions. It is a time to think, organize, ruminate, and take stock. There may be feelings of frustration and discontent during this time of withdrawal. But such times lead to enlightenment, illumination, clarity.
In regards to people, the Hermit represents a wise, inspirational person, friend, teacher, therapist, someone the Querent usually sees alone, someone the rest of the Querent's friends and family may not know about. This a person who can shine a light on things that were previously mysterious and confusing. They will help the Querent find what it is they are seeking.
(Tarot reading information from http://www.aeclectic.net/tarot/)
at February 06, 2010