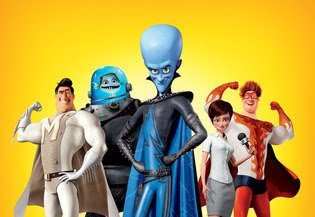 This is a classic story of Good vs Evil.. even better, it's the story of how evil needs good to have a good time being evil.

Well it starts with how Evil (Mr MegaMind) and Good began and that too was a classic example of a kid who got out-shone in everything possible against the Hero(Metro Man) and decided since doing bad was what he was good at, he would master at that instead, just so that he be noticed by others and have a chance at LOVE..
Well I did almost sleep off.. exhaustion and not boredom I must admit (luckily Belle woke me up), tho this movie was nice in many levels, nevertheless it was also something that would have been good to have watched in the house instead of the cinema.. so if you can't get the time to watch it with a box of popcorn and that 3D glasses.. you can certainly enjoy it when it gets to the home screens in the comfort of your living room.
Before I forget, what's really cute about Mr MegaMind besides his silly attempts at being a villain, was his unique phonetic pronunciation of his words like 'school', 'Metro-city' and several others.. it became his give away (you'll know what i mean when you watch the movie yourself.)
Will Ferrell gave his best and silliest voice for the movie... and who better for it than him, right?
at December 08, 2010