We Went To Neverland And Saw Peter Pan!!! 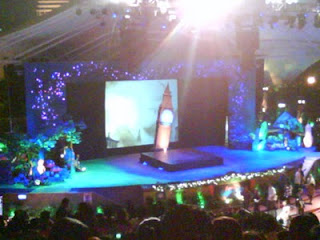 Thanks to AMBP, I had the chance to catch Peter Pan in Neverland at Sunway Lagoon Amphitheater last Friday Night (26th Nov) in the Grand Premier Show along with my Pixie Girl, Isabelle. We were indeed very excited to catch the show, and the entire process of getting ready and getting there was by itself enjoyable.

Collecting our complimentary tickets from the AMBP booth and heading our way to the Amphitheater, we were greeted by some horrifying spooky characters, who gracefully walked out dead from the Scream Park. Oh did I mention, we had a chance to see the Night Lagoon, Sunway has to offer the Public, and one of the many activities you can indulge in at night at the lagoon is the Scream Park. It's like being in Michael Jackson's Thriller Video!
The walk to the Amphitheater was nice for two reasons, it was with Belle and the view of the lagoon - the lighting past the suspension bridge was beautiful!
As we reached the gates of Neverland, we did therituals of every musicals and theater shows Belle and I have attended - the purchasing of the official t-shirt and the photo shoot at the official photo stand which along with the tickets would go as an add on into our Theater Scrap Book!!
The show started an hour late, as they had to wait for the crowd to come in, but the wait was worth the while.
It started off with Wendy playing in the snow on Christmas Eve by the Big Ben and the scene just took off from one to another with songs and dancing that kept the audience at the tip of their seat for the next in line, well at least it did for us. What I liked the most was the Pirates! Captain Hook and his troop did some pretty impressive dancing that got my feet tapping along!! Watching Peter Pan with Wendy, Captain Hook and his Pirates, the Lost Boys and yeah Tinker Bell was simply amazing!
The West End Production and Sunway Lagoon Malaysia, did a fantastic job with the musical, from the performance to the stage setting, it was worth watching!!
After the show, Belle and the rest of the children in the amphitheater had a special chance to take photographs with the cast. It was really nice to see the kids rushing up the stage to get a shot of themselves with the talented crew. 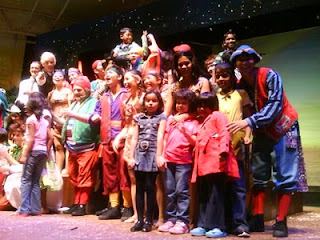 Lastly, the 800 over guest at the amphitheater were bided farewell with a
great downpour! So as we ran under the rain for the Pyramid, we still had our smiles plastered on our faces for we caught Peter Pan in Never Neverland!
at November 28, 2010