Giving up for Lent before Lent gives up on you? 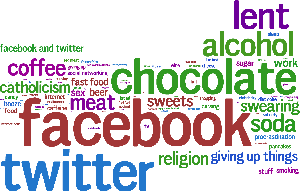 Lent is here once again, and what have we decided to give up for this season? Which we will pick up once the season is over? I know I sound cynical, but isn't it sad that we want to give it up for 40 days then get back to it after?

Anyway.. I didn't decide to give up on anything. Rotten me!
In fact it's this season of Lent that I always end up eating MEAT on Fridays.
I know.. I'm terrible.. I don't deliberately do this you know..
I guess the devil really works in blinding me from my wrongs and then blows away the cloud to let me see what I've done! Shit MAN!

Anyway, my darling daughter, decided to give up on Cakes, Ice Cream, Sweets and Chocolates after her Sunday school on the 1st Sunday of Lent, only to end up eating a mud pie which was my birthday cake, and when she was made to face that temptation, we told her she could start the next day. When next day came, she asked for Ice Cream. So much for vowing to give up SUGAR!
I told her specifically to give up FACEBOOK!
Yes.. she doesn't have a Facebook account, hence why I suggested it in the first place!
Anyway.. for those of you who have so far succeeded in your "giving-ups", congratulations!
For those of you who screwed up half way... hang in there.. and try again..
and for those of you who are like ME! Start man!! You don't know when the world is going to end so at least begin some day soon, will you!!!!
at March 23, 2011