If she had to choose between rice and curry in an Indian restaurant she would ask for Tosai or Brata instead. If she was at a Chinese restaurant, she would opt for steamed pau or noodles. But what she loves the most are French Pastries and Italian Pastas! My 8 year old sweetheart Isabelle has it in her head that she'd rather be French or Italian than Asian! The only Indian bit in her is her love for Tosai and Egg Bratas.

Today's movie outing led us to Deli France with Chicken cheese croissant and Sultana Croissant along with a glass of Pineapple Juice (her personal picks not mine). It was a delightful breakfast for her that it's almost time for dinner now yet she still says thank you for breakfast!

I guess that's probably why I craved for these similar foods being pregnant with her. She was moulding my diet to suit her palate even at the foetal stage of her life! Impressive!

Anyway, I only decided to go to Deli France out of my many choices because I knew I'd be impressing her! Hehe ;-) 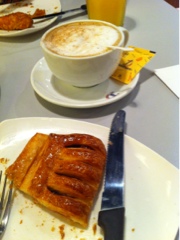