OMG!!! Movie Makers are getting so smart these days! The way old gaudy annoying and choking fairy tales are taking a sophisticated twist is impressively amazing!

Selecting Armie Hammer (love his accent after watching his double act in Social Network and yes his gorgeous looks too) as Prince Alcott was the best decision made and this act for Julia Roberts opened a new dimension to her acting skills! The dwarfs were tactically great and depth full and rather handsome too. Sean Bean! made my heart palpitate.. I meant it in a wonderful way although I wonder why he constantly has a constipated face from that of Game of Thrones. The costumes were lovely and the setting and script were witty, smart and touchy.

I hated Snow White as a kid you know. A pathetic young princess who needed to be saved by a pair of royal balls (I wasn't so shrewd back then but at such a tender age, I always wondered why ladies had to be depicted as dependent and weak more so being brought up by a strong woman in my life). However, the plot of Mirror Mirror flipped my regards for this classic a complete 180 degree!
Anyway.. since I never do write the plot in any of my movie reviews on my blog, I'm not going to do it now. You'll just have to watch it and bedazzled with the new directions.

Jason and Wilhelm Grimm who wrote Snow White back in 1812 would be smiling in their graves if they saw how their classic evolved in the 2nd decade of the new millennia! Alleluia for that..

The release of Mirror Mirror would definitely see a significant rise in 'fairytale humbug' converts like me! 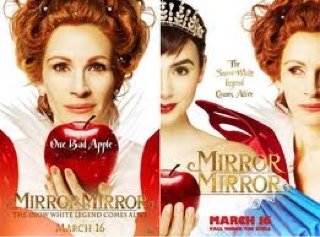