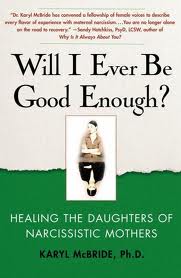 Reading this book written by Dr. Karyl McBride, has opened an entirely new dimension of life to me. I wasn’t all that shock to know Narcissistic mothers existed but it’s sad to know that there are many mothers out there who suck at watching out for their daughters and make it all about themselves while ruining the entire existence of their child. Selfish, self absorbed women who think its an obligation that their daughters should take care of them after failing to be a positive image towards the growth of their child is apparently very classic of them.

As much as it was difficult for me to read this book in public because of its title that had nothing to do with me and my wonderful mother, I couldn’t bring myself to putting this book down because every example Dr Karyl made in her book from her own experience being a daughter to a narcissistic mother and examples from her patients, just kept catching my throat as well as my attention to go on reading - to think a woman could be such a bitch towards their own daughters!!! Sadly a narcissistic mother will never admit or acknowledge she’s one and goes on believing they’ve done their best and like no other could in their mothering as well as denies any form of hurt and trouble they have caused on their daughters. It’s always NEVER their FAULT! They would happily live blaming everyone else but themselves and making themselves be the victim is their ultimate solution to the problems they themselves caused! In fact, they are so smart and skillful at making others believe they are the ones being hurt by their daughters instead of acknowledging that whatever screw ups between them and their children is partly if not entirely their fault!

Narcissistic mothers can be destructive and cause so much chaos amongst their kids just to make sure they are the center of attention at all times. They can’t stand seeing their children united because some how they are so sick in their brain to think that when their kids get together, its about her they talk of.. but I guess to much extend it is true because such mothers have feed so much rubbish into each child about another, that they fear deeply if each of these child meet up without their presence, they would eventually learn her poisonous ruins!

Doesn’t it get exhausting for mothers of this nature to live their whole life like this?

"Emotional legacies are passed down from one generation to another” - this line got me thinking deeply and it answered a lot of my questions.. I guess it is true.. that for a girl to grow up being confident, independent and happy, she would need a mother who is of the same essence. I’m so proud and thankful to GOD for the mother he gave me! For being a woman who left her own mother’s side at the age of 10 and grew up with her aunt, my mother sure was a strong, confident, independent, intelligent and good natured woman, and I’m so glad that all her gracious and wonderful traits will be passed down to her grand daughter through me as a legacy of her strength! Young girls need strong mums to protect and guide them and to teach them to love themselves without damaging their child’s self image. Mothers who are too bothered about what others would think and what others would say.. eventually screw their daughters up and fail to enjoy their own relationship with this gift of a daughter that had been given to them.

For those who struggle with Narcissistic mothers, looks like disconnecting yourself is the only way to heal the wounds put upon you and to grow into yourself and not an extension of your own narcissistic mother!

End of the day there's no other way to look at it except - YOU PAY FOR WHAT YOU SOW!
You want your children to respect you in your old age.. you have to treat your children with respect throughout their growing years and in their adulthood..

You want your children to love you and be there to care and support you emotionally - you need to be present emotionally in theirs!  Most of all, never get your priorities wrong.. NO! you don’t need to watch over your daughter’s shoulder every second of their life and be a menace to them instead open up room for acceptance and UNCONDITIONAL and SINCERE love between each other and the rest will fall in place.
To the many mothers I know who got that right.. Well done!!