This morning as I read this advert email in my inbox, I immediately recalled what my husband said a couple of months ago after he got himself a smart phone - “Everything has an APP, one day even to take a ‘dump' you would require an APP!” 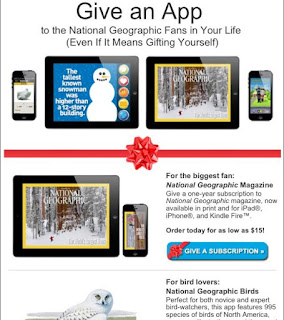 No I’m not advertising on behalf of App Store or National Geographic for that matter, but as much as these Apps have their fair share of absolutely fantastic ones to totally disastrous ones, I am no less a fan of Apps especially if the are “FREE!” (Hey! I’m Malaysian, what do you expect?)

Apps, free or purchased with a price can be recommended to others or given as a gift to someone you like.

Now the season of CHRISTmas is here and guess what, you can gift an App too!
I wonder if they have an App to connect with JESUS, MARY, JOSEPH, the SHEPHERD BOY, or one of the TREE WISE MEN. Could they have an App to tell you the astronomy of that Northern Star?
Or is it that hideous SMASH SANTA App?

Many depend on Apps to tells us where to go for what we want, how to cook, how to do photography, how and more how.. I’m not being cynical when I say all this, like I mentioned earlier, I am a big fan of FREE APPS and have personally spent a bomb of USDs on Apps as well, but when it comes to CHRISTmas.. I think I’d like the traditional style of gift giving and receiving.. physically taking the time to get something or make something for the ones you love, and if you don’t have the luxury of time to do so, a warm hug on any of those 12 days of Christmas would be simply wonderful enough.

I hate to think that maybe someday in the near future we would have an App to represent or replace us at home for Christmas.  Everyone is virtually present, carving an App roasted turkey with an App knife and saying cheers with our App wine glasses made filled with App wine? An App CHRISTmas tree, an App Fire Place, an App House? Or have we already started that App-FULL lifestyle? Virtually being somewhere while you’re physically somewhere else, without any fussing around for flight tickets and annual leave, just send the tablet or pad ahead of the season to your family, gift them an App and tell them to go on Viber or Facetime and I’ll see you there on Christmas! May be this will serve immensely well for those stuck in duty and obligations that require their presence, a matter of life and death, or to connect to their friends and relatives in distant places, video chats are fabulous indeed but sadly even those who can make home, sends themselves home via an APP! Ah.. I know it’s the choice one makes for what they prioritise most.

Anyway, back in the 80s many believed robots were going to rule the world, I’d like to say may be the APPs beat them to it!