I came back from sending Belle to school today and found this in my mailbox, with only my house number on it and I thought it was a memo from the Management office or something, instead it was a wedding invitation from a neighbour I haven’t spoken to nor do I know which face to place with the address and name in the card, but yes its an invitation to those living in 210 - My family! 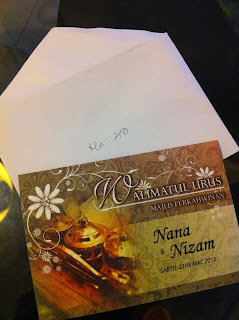 This brought back memories of life outside the CITY. Back when I lived in Klang, I remember the number of invitations my parents would receive from neighbours left and right, back and front of our house and although many of them we did not know personally, the invitation to a happy occasion such as a wedding never stopped coming by our home. Of course one of us would make the effort to go as a sign of neighbourly respect, and when sadness befall a neighbour, such as death, we would go and pay our respects as well, even though we never knew them personally. All that kept us together was the fact that WE STAYED IN THE SAME NEIGHBOURHOOD, and I believe that is the beauty of being a Malaysian. We put aside our differences and respect each other because we are neighbours.

We put up with the sounds and colours of our celebrations and have our homes open to our neighbours to come in for a drink or a meal. We watch children grow from learning to cycle into being adults who drive a motorcar. We see parents becoming grandparents, we watched neighbours move out or migrate. We have school mates and bus mates living among us. We have friends who share a park with our pets, fields where our kids kick the ball with other kids. We have neighbours we could depend on when we need a helping hand.

I remember when we first moved to Chi Liung Pandamaran in Klang back in the 90s, and my sister in law’s water bag broke and went into labor, there was no car in the house as my dad had gone to work and my mum ran to the corner house and asked the neighbour for help. He agreed and took both my mum and sister in law to the clinic and then a week later he changed his car because his back seat was, how shall I say it? GONE! hahaha.. Well it’s hilarious.

Back in Berkeley Garden, also in Klang, I used to see a friend in the park, Maria, and our fathers became friends before we did, and now we are still friends, even after 30 years though in 2 different continents.

I think its beautiful how neighbours teach us tolerance and how even though we run our lives separately, we still remember them throughout because we lived in the same neighbourhood. Some drove us up the wall as they hoarded away, some with their insensitive insolent behaviours, but that’s what makes it interesting, that we live to tolerate the bad and value the good. Something I believe Malaysians should not take for granted. Our unique ability to live in harmony despite our differences.
We have come a long way to give it up or see the ruins of it no thanks to the political tensions we face today.

Anyway, this invitation card, along with the smiles of the people who pass by my house for their evening walks and some with their dogs, or riding their bicycles without paddling down the slope, raising their hands and saying HELLO at us while my kids play outside, is simply heart warming. It’s nice to finally feel it again after 10 years of living in the city where everyone is too busy to live!
at March 14, 2013