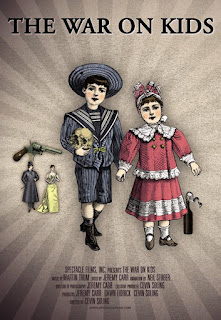 Last night my kids and I watched WAR ON KIDS, the Independent Documentary on Sundance Channel and at the end when the scene changed to an African American student aged around 7 being handcuffed by 2 police in the school office, CJ started crying.

He became so upset that he said - WHY DONT AMERICANS LET KIDS BE KIDS? THEY ARE JUST CHILDREN! NOT BAD GUYS!!!

Then I told him, yeah we are blessed to be living here, imagine if you were there and you tried to be ULTRAMAN with your friends in school? What on earth would they do then?
He argued saying, WHY NOT? ISNT SPIDERMAN, SUPERMAN and IRONMAN from there?

Then Belle said YEAH EVEN HULK! WHY THEY MAKE MOVIES LIKE THAT BUT WHEN A KID PUTS HIS HAND LIKE A GUN THEY GET ARRESTED??? SO DUMB!!

Thats the logic you get from a 6 and 9 year old.

Kids do what they see on TV, but they also get punished in school so drastically? Why isn’t correcting a child with some logic added to it beneficial enough? Must they at such a tender age, and at an age where they are easily influenced and excited and searching for their identity be punished as if they were CRIMINALS?

I honestly don't agree with the system being so. If we had such a policy here, I think police stations would be more crowded than public schools! And teachers would have a field time not being educators of MORAL VALUES that try to change the perspective of a child to be and do good rather than the opposite.

On another note, I don’t believe HOMEWORK does NO GOOD to any kid below the age of elementary school. Homework to me is a way to revise and to keep track with what you have studied. In fact not only should homework be about what they have studied for that day, it should be about what they’ve already studied in their previous lessons. It can also be about what they need to research for for their following lessons. It not only reinstates the subject learnt, its a form of self discipline where time management and memory is practised well. So that bit I don’t agree with the parents over there.

School should be cool. Learning should be fun.
It is not meant to be a military regime, but a place where children grow learning about themselves and those around them as well as to have logic and civic lessons thought upon them about what’s right and wrong.

Watching this documentary, I really felt sorry for those kids.
Is that still they way it is in the US? I know this documentary was made in 2009, but has any transformation taken place over there in regards to how their children are treated and thought in school?

They are just KIDS as my kids too say.
Discipline and awareness can be thought to them by simple dialogue on ethics and principals of good and bad. You don’t need handcuffs and prison cells to deal with a child who acts like he’s shooting a gun using his finger, or for bringing a nail clipper, or a stake knife to eat her stake, you just need to sit them down and explain! Or is that too much for their teachers and senior staff to do?

If they only accept PERFECT kids at school then they obviously don’t know the very definition of SCHOOL and that’s a pretty SAD state indeed!