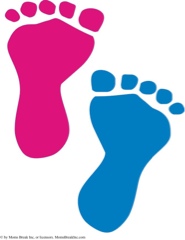 What colour do you think your child would choose if you as a parent hadn't influence them towards it?

Belle hardly had anything pink because I'm not in favour of pink myself. But I didn’t stop her from choosing it fir herself but seriously I'm still puzzled at her disfavour for it.

I never overwhelmed CJ with blue but he somehow goes for blue himself and later as he grew older, he started gender classifying colours based on the kids in school, so much so he asked Belle why don't you carry a pink bag or wear pink like so many other girls do. Pink is for girls right? And blue is for boys! Well AJ loves yellow, and I, purple but most of my stuff are in the shades of brown. Yes brown not grey.

I believe there's a scientific explanation to why kids are drawn to some colours and I'm certain it doesn't always have to be the influence of parents. But in the case of this study The Pink And Blue Project  (article from Salon.com) I wonder who’s living the childhood. The parent or the kid? The photos in this article really gave me a head ache.
To think children are stuck with so much pink and blue, haven't these parents heard of the United Colours Of Benetton?
at April 10, 2013