Today, instead of hearing the rattling sounds of bargaining at the wet market, I heard the swearing and cursing of several distinct political names which entertained AJ n I while we waited for our Ikan Bawal to be cleaned and chopped.

Listening to these people speak, really got me thinking about the many who actually TRULY depend on the government to make their life a little easier and meaningful but simply failed at receiving it and the many who were cheated and are still being cheated by our dear politicians in power. 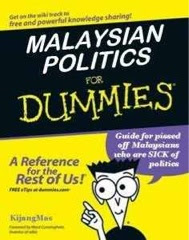 As much as I have decided several years ago, to call myself the "expat Malaysian who lives in Malaysia," I too must say the reason for my feeling so distant from my rightful sense of ownership to this land my father shed his blood for, is because our leaders have made me and many I'm sure, feel that this country has gone to a bunch of monkeys who look more into feeding their own family tree and fattening their wallets. Indian first Malaysian after, or vice versa? Well I'm human first than Malaysian lah! When citizens depend on a government, we expect a little respect for even the most little contribution one may bring forward to this country they call home.

Will there ever be a government who would truly care for its people without first caring about themselves? Well by all means care about yourselves but don't rob others to do yourself some TLC! Don't give us an ounce and swindle a gallon and think we are the monkeys you get to control with a bunch of bananas in your hand.

On another note, when you live out of the city, and see the living conditions of many, you'd know how much we haven't developed, or rather progressed fairly. You'd know that many Malays struggle although many non are made to hate their rights. You'd see how many Chinese only own a bicycle and struggle to feed their kids, you'd discover how many Indians don't own anything on this ground to call theirs. But our leaders, supposed leaders, walk in and out of jewellery shops in foreign lands buying stuff they don't need out of the money they don't own. You'd see how politicians are welcomed to officiate a new business upon given a sum of money as payment for the favour, then drives away with the finest things the merchant has brought into his shop for sales. Yes trust me I've heard a fair share of such stories as a kid who followed my mum shopping in the Indian streets of Klang. You think being 10 or 12 I'm busy looking at bangles? Nope, I heard the political talks people made back then and hearing what I did today in the market rang so many bells.

Well one would see and hear a lot more if one just came out of their comfortable zones and took a walk with eyes and ears off one's smart devices. Our leaders use us and once they get what they want, they don't really care anymore till the next round of elections come about. Throw in some road repairs, new pipes, 1Malaysia provision shops and off they go shopping at Jewish Diamond stores and Aussie streets.

As much as I believe you need to help yourself and not expect, hearing and seeing the faces of these few people, and seeing what I see now that I'm no longer a city gal, I'm constantly reminded of the moral obligations our leaders fail to uphold and how much longer are Malaysians going to allow this.

Yes we are a peaceful nation, comparatively speaking.
Yes we are blessed as a nation, but while all this are used to advertise stability by those in power, we must not forget what's happening behind our backs and for many, it happens right in front of their faces, day in and day out.

I for one, being the expat Malaysian in Malaysia, believe this soil needs a change!
So lets give Her what she deserves! (No I'm not talking about Rosmah)