What’s with all the RUCKUS and CHILDISH behaviour? You of all people should know what DEMOCRACY means. Aren’t the RAKYAT allowed to vote for whom they want? Oh ya kan, forgot that 505 was just an international DRAMA MINGGU INI (weekly soap opera) or better yet a charade played by SPR! Now it’s time to put on a show to tell the world how ungrateful the citizens are especially the Chinese instead of admitting and agreeing to doing better?

Such a typical NARCISSISTIC trait isn’t it?

BN has won, but because they lost the popular votes, they are taking the SORE LOSER role now and making it into a racist issue. All this sure looks like an admission to their victory not being victorious isn’t it? Told you the face on 605 said it all! If only those phantom voters were allowed to vote, someone would probably be the happiest PM right now and might even say his 1Malaysia policy is by far the best and act like a SORE WINNER to countries that are fighting to keep up with racial unity, don’t you think? That would be another CHARADE of his but in actual fact we are personally working very hard in keeping the UNITY without his help.

Well now its about the race differences in the parliament? REALLY? What the hell man! Do Indians and Chinese complain when we have to be 1 in a class of 44 Malay students in a multiracial county? Or be the 1 in a 75 Malay staffed department and have to work round the clock when it’s a muslim festival or even so, when a muslim staff needs to be at work during their festival because they have no help from their non-muslim friends since there aren’t any employed as staff in a government department that works 24-7 such as in our hospitals? That’s a bummer you know! Personally I have seen how that sucked for both the Malays and the non Malays. The parliament doesn’t go on call right? Or does it? Why bicker about the racial situation in your parliament as imbalanced? If you truly are the Father of 1Malaysia, you shouldn’t even bring up race as an issue unless your parliament is filled with just one race! PAS, DAP and PAKATAN are Malaysians too. Don’t look at your rivals as imbecile citizens lar. A well educated and ethical person will always accept a good challenge and stand his grounds without such idiotic bitching. Be a MAN, man!

On another note don’t try to elude the fraud by bringing all this up to fill the newspapers with. The educated and rational thinkers in Malaysia know how horridly Journalism is in the main stream.
I feel this is just tactics to divert attention to things that are even more senseless, as always, has been a trademark of our leaders. Yes hundreds of JUMBO Jets didn’t land with Banglas in them, but thousands have already landed since the last elections. And to why people are attacking UTUSAN and not the Chinese newspapers, well most of us know who owns UTUSAN and most of us read BM better than Mandarin. What’s the point of placing Mandarin writing on the screens and asking "why you say like that ha?” when we could just ask you why you never stopped your party funded papers from taking up a tone like that because you are the one who stood strongly on 1Malaysia or have you forgotten that?

All this sweeping statements are being thrown just to stop people from thinking about 505. Really it is. Playing a psychological route to get out of the hot pot is going to make them fall into the fire.

Stop all the plays and get on with what’s relevant la and at the same time, on a neutral ground, I hope BERSIH gets to find out who is the culprit to all this fraud and put an end to the mess SPR has made with every evidence of blackout and Magic shows Malaysia has witnessed at our GE13. Malaysians deserve the answers. And remember, Malaysian, we are UNITED. Don’t be their puppet and lose focus on what is the actual issue at hand - ANSWERS about the cleanliness of SPR! It doesn’t matter who we have voted for, just don’t allow their illogical and racist claims destroy the unity that we have always been fostered. Don’t let them talk on behave of those who didn’t vote for them. Don’t go around asking your non Malay friends to balik kampung because their kampung is the same as yours. 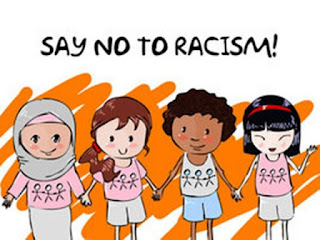 Politics is never made to keep people together which is why good parents don’t play politics with their kids because politics always ends up favouring one person at the expense of another.
If you look closely at our culture, what’s truly keeping us together are the religious teachings we are given at our places of worship and teachings of tolerance our parents and grandparents thought us after all the pain and bloodshed they have seen and been through. Don’t allow all that to go to vain by condoning comments by leaders who care not (as seen obviously) about true racial respect.

So redefine what our politics should be Malaysians - Make it the system that ends CORRUPTION and FOSTERS RESPECT, UNITY AND STABILITY at ALL TIME and at the EXPENSE OF NONE! We have a deep history to remember never to be repeated but at the same time, don’t be oblivious to why it even  happened in the past and work into analysing the root cause.

Please don’t take the words of our politicians LITERALLY!
They have no rights to assuming why voters did not vote them because they never really cared to ask or listen. It’s a lop sided argument you know! Unfortunately we cannot stop people from saying what they want to say, but we can stop accepting it as TRUTH.

Instead of throwing insulting racial remarks, how about we turn around and ask our neighbours how they feel and what can be done to make Malaysia better. No one is trying to ruin anyone’s birth right so lets not allow the government to feed such ill knowledge and ruin our peace as citizens of this country! Remember when we die there’s only one heaven and one hell. We will still see each other there which ever side we land, so let’s make this life worth while and stop racism!
at May 08, 2013