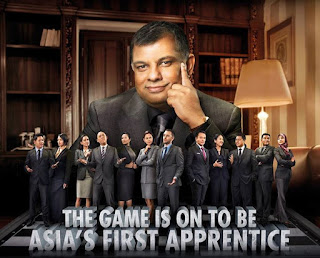 The long anticipated show finally aired on AXN and watching Tony was both exciting and disturbing.

Exciting because IT'S TONY!
Disturbing because he is not DONALD TRUMP!

I got the chance to listen to Tony on Red FM yesterday afternoon and hearing him say that he rejected being part of Apprentice Asia for 2 years for the same disturbing reason, totally made sense.

Donald Trump is a business tycoon of his own definition and making Tony play the role of Donald just didn't seem right because they both are uniquely successful businessman, and it's not appropriate for Tony to act like Donald at all. Yes, Tony was asked to make this show as his, but it's The Apprentice! It's a synonym to DONALD TRUMP.

Anyway the show is made and yesterday's premier we distinctly saw the camera man focusing on Tony's firing finger. I must say the Apprentice that got fired looked as if he willingly led himself to the slaughter house!

What was Hendy Setiono even thinking? He kept beating around the bush whenever he was asked a question and the smirk on his face, my goodness, I was seriously expecting Tony to tell him to wipe that off!

Yesterday's premier clearly showed the vast and distinct difference between a street smart and a book smart person. They all, to me, fall in the latter! Are these contestant really the best of the best in Asia?
They certainly didn't seem so, and come on, if you can't sell fish, you better go back to business school and figure that out!

I could give a critical comment about each one of them, but I'm not going to waste my time doing that or waste my time watching this show again and I don't know why Tony wasted his. Why can't Asia come up with their own stuff?
at May 26, 2013