PROUD TO BE MALAYSIAN?

I have been sitting on this page for the past 2 days, wondering what I should say. 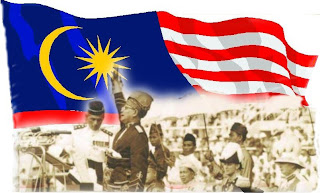 After my many failed attempts of coming up with something in this post, I decided to turn my title into a question instead.

Am I proud to be a Malaysian?

Well, I instantaneously answered myself, "Why shouldn't I be?"


The Media has been trying hard to ignite the spirit of Merdeka, although you don't see it in the air as much as it used to be in the past.

As much as there's a lot of bickering going on with the current government (who's always been our government since Independence, so much so I think we freed ourselves from Colonialism and got ourselves attached to 'Barisanism') and not a single day has passed us by since GE13, without a ridiculous news in the media of someone saying something senseless, pointless, baseless, etc etc etc (end of thinking capacity). The bullshit in the news is just too much to handle that it gives us a nauseating headache most of the time. But that's the thing, it gives you a headache (FULLSTOP).

How ever annoying the news gets, we can't deny the fact that we are blessed to be a peaceful nation. A nation that still has a good number of wonderful people who cares for each other, who would come to each other's aid and most of all who would give each other enough respectable space to live and prosper and the best part of all is that they come from different race and religion. We do not allow our differences to come in the way of living together.

We have PEACE and we ought to be grateful and thankful for that every single day of our lives. Malaysia has been through a lot and it can still go through a lot more if we fail to play our roles as citizens wisely, honourably and most of all humbly.

We have a lot to be proud about if we only sat and thought about it. We have each other and together we can keep this country the way it should be, prosperous, peaceful and united. Let us the ordinary RAKYAT, not let the wrong teachings, false accusations, sweeping statements and spiteful racial claims create an upheaval in our country that might never be settled if we took what we have now for granted. We have a mind and a heart and we should always nourish it with good will and love for each other so that we can maintain unity through respect. We don't need government programs to help us to be united, we've been doing a pretty good job without political assistance all these years because of our own humane attributes for life - the life of our own, our loved ones and our neighbours.

So am I proud to be Malaysian?  Yes I am because saying NO would just make all those blood shed for  our peace go to vain. Because saying NO to me personally would be like spitting at the 20 odd years of service my father had put in for this country through the arm forces and it would be like closing my eyes to his brother who was killed while in service for our own people and for the thousands more like them who have served in many different ways who may or may not still be around, for the well being of our land before and after 1957.


This Merdeka, let us celebrate our differences through our similarity, and our similarity is we are all MALAYSIANS. Let's block out the racial nonsense that many leaders have thrown at us, for one day they will be paid for their work. We shall not let their senseless talk poison our minds and hearts towards our fellow Malaysians. Let's remember that in reality one bad apple doesn't have to mean the entire basket is ruined!

Let's put aside the bitterness of the past elections, the stupidity of the news in the media and let's say today MERDEKA! and cheer it on for those who gave us this country without any hidden agendas or selfish intentions. Let's celebrate it for them, and carry on this burning flame of gratitude to God for them and their actions and guidance for moulding our minds to wanting the best for our country and everyone in it.

We all owe it to our older generation, our parents, uncles, aunts and their friends and neighbours for what they have passed on to us - PEACE! And may we do the same for our own kids and never fail to teach them how to be grateful for what we have and for each other.

The grass, they say is always greener where you water it, so let's do our part shall we? Let's put LOVE, FORGIVENESS and KINDNESS before ourselves when we deal with each other because the way I see it, Independence back in 1957 was from foreign invasion, but right now it as a fight for independence from the invasion of irresponsible leaders and media that could cause chaos in an instant if we allowed perverse thinking to rule our actions. We'll say CHEERS to the Independence of the latest invasion soon enough but until then - 'Happy Merdeka Malaysia. May God continue to bless us all. Amen!'
at August 30, 2013