Are We Really Fighting For God?

The past few days have had me thinking even more about how irresponsible our leaders are becoming especially since the announcement by JAKIM over what words that can and cannot be uttered or written by a non-muslim (http://www.themalaymailonline.com/malaysia/article/as-allah-appeal-nears-jakim-calls-for-holy-struggle-among-muslims) and then the prediction of public disorder if the court permits the Catholic church to use "Allah" for God in the Al-Kitab (http://www.themalaysianinsider.com/malaysia/article/putrajaya-to-argue-non-muslims-using-allah-will-lead-to-public-disorde).

This morning after flipping through the many irrational articles, I stumbled upon this NEIGHBOURS-IN-SPIRIT and I felt happy to know that somewhere out there in Malaysia, we still have wonderful scenarios of inter-religious respect and harmony.

We Malaysians were a society who CO-EXISTED well before and I believe we still do in many ways and many places but is this a vision and aspiration of only the ordinary citizens? I fail to see it practiced in those who actually have the power to make a positive change - LEADERS both CIVIL and RELIGIOUS. Why is that? 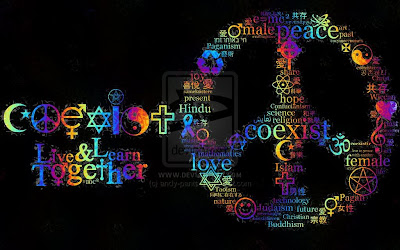 Is our faith the size of a mustard seed that we cannot handle co-existing with other fellow humans of other religion? Are we so easily swayed from our believes that we need to ill-treat others just because they don't practice what we do? How then do we say we PRAISE GOD but fail on every ground to treat GOD's own creation - YOU AND ME and the rest of the HUMAN RACE with some dignified love and respect? Who are we to KILL, DESTROY and CONDEMN what God had made?

Are we really fighting for GOD? GOD is so powerful, if he wished he could wipe us out in a fraction of a second but instead he tells us to LOVE, why? Because LOVE is the TRUE reflection of HIMSELF.

Are we really battling for his GLORY? He didn't come down to earth and tell you and me who has the right to call him what and who doesn't, did He?

Why do we allow such trivial things to come in between us and have it ostracise HIS own creation?
We follow what is written in our religious books. How we interpret the words of GOD is very important but more importantly WHY you interpret the holy word is what makes us do the things we do. Wanting to kill and destroy, or insult and humiliate is what you get when words of love is interpreted in the context of self-glorification and greed.

So back to the question, are we really fighting for the all powerful all mighty GOD? The God who has the power to wipe you out when he thinks you have done enough damage in HIS NAME?
The God who would probably be wondering what is wrong with this creation of His, where they fight against each other for mere language, relics and yes MATERIAL THINGS when HE, GOD is spiritual and beyond this world!

We fight each other in the name of GOD to conquer what? Let me see, so far looking back in history, we fought in his name to CREATE EMPIRES, STEAL NATURAL RESOURCES, STEAL LAND, DESTROY HOMES etc etc.. yeah.. they are so spiritual aren't they? We fight each other for where we can build our house of worship and fail to see that the house in within our hearts!

We find people fighting each other in HIS name because we want something for ourself and we glorify it thinking it's for HIM, looks more like it's for SATAN instead and I'm sure Satan's having a good laugh.

I would rather DIE for GOD in trying to make everyone live and love each other instead of KILLING in GOD's NAME and say I did HIM justice because if you cannot co-exist, you have failed in doing the first most important thing in religion - love your fellow human race: the creation of GOD itself and the second which is: DO NO BAD!

We see wars happening and we ask why GOD is doing this to us, why can't God stop this? Hey! STOP and look at what is going on, we fight in His name against good people when He never asked us to! We fight in His name because some so called LEADER decided to interpret the HOLY WORDS with the wrong intentions, and say we are doing it for Him while completely destroying the fundamental teachings of that religion.

We have leaders who use his name and treat others so horribly making chaos for everyone and then like fools people who fail to think, act upon HUMAN irrationality and call it HOLY BATTLE! To me fighting with one religion over another is not called Holy Battle; it is called Horrific Insanity!

Did God ask us to do this? God asked us to fight against our sins and evil. How does another human who is praying for peace and happiness seen as evil that we need to battle them? How does restricting someone from using his language to praise God or as a interpersonal communication seen as a cry for HOLY STRUGGLE?

Didn't we create our own demons by our own selfishness only to end up messing up what beauty God has actually handed over to us? The Peace he wishes for us? It doesn't have to come in the cost of destroying, insulting, belittling and condemning his creation. Let God judge us when we stand in front of him over how well we chose to live in HIS NAME through our ways of respecting his creation which is other words respecting Him. If one fears of loosing a soul to another religion, you should use love and kindness to lure them back. Then again, you ruin the body but you can never ruin the soul of a believer!

Tolerance is very important, and when we cannot tolerate each other's differences, we do what actually the DEVIL expects us to do and that makes PRAISING GOD pure HYPOCRISY.

Now this is something I found in the news today, something may be the Malaysian News should highlight in their papers!  How we all can ring our praises in our own unique believes and teachings and ask God to help put some sense in the heads of irresponsible leaders and people who think they are doing justice to Him. Let's use our RELIGION to FIGHT the DEVIL who disguises himself as God, instead of against each other who truly want peace and justice for all mankind.

Christians and Muslims pray together during Francis’ “miraculous” peace vigil


So instead of making rules banning people from uttering words only rightful to a particular religion, think about the consequences of both sounding dumb and disrupting peace and unity through souring neighbourly love and respect! Sometimes I feel they've forgotten they live in a muti-racial and muti-religious country or is it only for advertising so that they can make money through tourism but in reality we are all being WHOLLY WRANGLED through a pretentious HOLY STRUGGLE!