From Miley to Davuluri

Are the people on Twitter ruling the world?
Well, apparently they do but are we letting the dumb ones rule? That's my big question!

Weeks ago we heard the havoc of Twitter over Miley's performance at VMA 2013 and now that that had died off, it's Miss America 2014 - Nina Davuluri going all hot in bombardment on Twitter.
I feel rather sad to know that some Americans don't know the difference between Indians and Arabs.

Then again, we in Malaysia are no better, what do we say about people calling Indian Muslims as Malays, and Indian Christians as Eurasians? I give up honestly! It's as if, if you are not Hindu and Indian you are not Indian at all. REALLY? Get your race and religion classifications right la people...please (or be like our PM and call yourselves 1Malaysia but treat everyone according to their race first).

Indians, Arab, well in reality many out there don't even know where Malaysia is or even exist. I have met many who knew Thailand, Penang and Singapore but Malaysia? As if Penang was an Independent Republic or something. Anyway... Some of the Tweets were rather idiotic and only showed the shallowness and level of intelligence these people had. I mean, if you want to be a BIGOT, be an INTELLIGENT one at least right?!Who goes around calling an American with Indian descent an Arab and attacks her based on her skin colour, assuming she was muslim? Even if she was, what's wrong? What has she got to do with 9-11? Being a muslim, doesn't mean the person is involved with those terrorist, just like being a Catholic doesn't mean all Catholic men are pedophiles because there were Catholic Priest caught in the US of A for that!

What puzzles me is that they haven't really come out of their cocoon to what the world is evolving into especially what America is supposed to be all about - the land of possibilities and opportunities (I wonder who came up with that actually).

However, who's to say these tweets were not works of frauds, made up only to hype and create attention subsequently raising viewer statistics. Seems to me anything is possible these days and many would do anything just for some publicity like Miley.

Bottom line, who cares what these low IQ, cocooned twitters have to say? The fact that they got the basic facts about Nina WRONG, shows what a waste of time their opinions(Tweets) are so why bother? They too are seeking attention at the end of the day to have their tweet picked up by Huffpost or E! and even CNN, over their disappointment. Someone ought to tell these tweeters to use their smart phones and do a little research before blabbering crap!

P.S. I'm not going to post those tweets on my post.. they don't deserve anymore attention, so here's a gorgeous well deserved picture of the newly crowned Miss America in her Banana Yellow Gown and Crown! Well done and Congratulations Nina Davuluri. It would certainly be fun to see you stand next to other Indian girls from different countries for Miss Universe / Miss World Competition (for those who don't know where else Indians might be.. please utilise GOOGLE  or just open your WORLD MAP or your globe and point somewhere.. anywhere.. 360 degress around earth.. the possibilities are endless!!!). 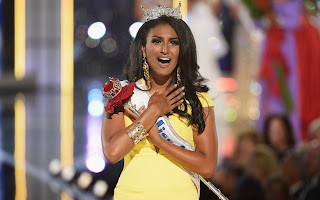