Of ChildrenS and Guest of HonourS 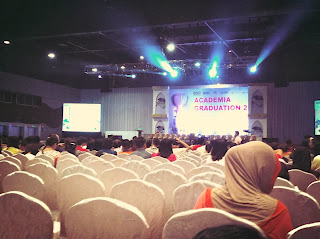 That's the language analysis my 6 year old son gave me after his graduation ceremony. He was mainly referring to those who spoke on the microphone from the stage - the Master of Ceremony, the Vice Executive of the organisation, and the lady in charge of calling out the names of the graduates to collect their scroll. Everything was nice except when they opened their mouth to speak in English!

My son was not the only one who bickered, I was bickering too from the start, drilling my husband about so many things that ticked my spine which incidentally ticked his as well. Dress code which Malaysians fail to comply with. It's as if every where and anywhere people think a t-shit and a pair of shorts are the perfect attire for FORMAL WEAR! Secondly how in an auditorium of almost a thousand parents, 2/4 of them had their heads down looking at their devices, the 3rd 1/4 was taking snap shots of themselves and the last was waiting patiently for the graduates to come in but when the graduates came into the auditorium, automatically every one in the first 10 rows STOOD UP, no not to welcome the grads but for photograph on their PADS, TABS.. you name it, they used it! These people couldn't care less about those seated at the back. So my husband and I watched the grads enter through their devices. Seriously, those who stood outside the auditorium had a better view from the projector TV!

The stab to all gloriousness was of course the COMMAND OF ENGLISH the organisers had! It was horrendous. They have no clue how ridiculous they sounded and so many of us parents, of all races kept correcting their grammar under our breath from where we were seated. To think they are an education body that no doubt has a excellent curriculum and teaching devices offered at their centres, it saddens me to see how poor their own command in the language was. They literally translated Mandarin to English and finished the event. Non of them had to give an impromptu speech. They all had every script in their hand yet their sounded like ducks quacking English. Who says CHILDREN as CHILDRENS, and "we welcome guest of honours enter hall now" or "Give speech now is CEO XXX Group"

They publish their names on the graduation booklet with their qualification next to it: MBA (MMU), MSc (MMU). It's such a disgrace to the institution and the Masters they hold when, when they open their mouth, you don't see any trace of qualification in them! I'm very disappointed. Seriously disappointed!

The best was of course seeing the grads receive their scrolls. In fact everything was professional but all professionalism flew out of the auditorium when they opened their mouth to speak.
at September 23, 2013