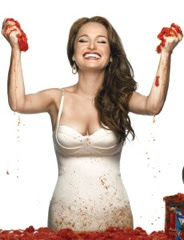 I don't know if it's just me or what but I get so mad when I see the hosts of cooking shows throw away so much raw material just to make a dish. Giada of 'Giada at Home' is one of them. To make a salad, she practically discarded 3/4 of the outer lettuce so as to use only the inner part because (listen to this) that's what she likes the most.

That's what she likes the most?

I wonder what she would do if her life took a 180 degree turn and to get just that outer leaf of a salad would be a miracle (as is the case of so many around the world).

It's just disgusting to see someone brag over class, poise and liking while completely disregarding their wasteful actions. (Her salad dish by the way is just one of the items that ticked me off, she does this wasteful thing almost always if you watch her show)

Don't worry, I know how everything is sponsored and everything is for the TV purpose but think about it, wasting raw material and cooked food is not something rare to the real world - tons are thrown away and discarded from hotels, restaurants and yes, TV shows! All that food could actually feed an entire continent, don't you think?

The next time you watch a cooking show, pay attention to the attitude of the cook/host. Watch just how much some of them waste while some make use of ever inch of material they have to make a dish or several different dishes with the outer inner upper or lower part of a cabbage for instance as Hugh of 'The River Cottage' show would. 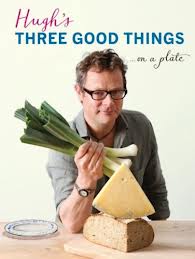 TV viewers most time would do exactly what they see on TV and if the host throws away 3/4 and uses only the central part of a lettuce for example, believe me, those at home would probably do the same. Teaching how to waste is not a good show if you asked me and watching Giada at Home yesterday with my husband got us asking each other, "WAH! WHAT A WASTE MAN!!!!" almost every other time she made a culinary step.

I'm thinking, could it be the Asian thing in most of us I know in Malaysia, who are particular about not wasting raw items because we are constantly in contact with those who are less fortunate and we feel mortified to waste what we have, simply because we feel guilty that one day not respecting the blessing given to us is going to come back and bite us in our ass or because we grew up being taught to respect our food since we all at one time or another have experienced life with so little of it or heard so much of it through the stories of our parents and grandparents about their life during the pre and post-war era? It just occurred to me, how much of these stories do we actually pass down to our kids so as to mould them to be watchful over their actions to food wastage or gluttony for that matter? Then again, why waste? It's like literally throwing your cash into the waste bin isn't it? Buy to throw? Come on!

I believe most of us grew up watching our mothers cook with such care and watchfulness right?
I remember something many don't do these days, like cracking an egg and using your finger to wipe clean the white egg from the shell or using your knife to scrape the carrot instead of the peeler and using your knife to rub off the excess skin of an onion instead of throwing away the other layer or 3 outer layers like what Rachel Ray does in her '30 minutes meals' show. 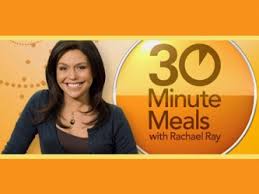 Whether a TV show or in our own kitchen, we ought to think again before we throw away that 5 layers of good to eat lettuce or the 1/4 of capsicum we didn't think would sit flat enough to make thin strips for a bowl of salad as Giada did.

The choices we make today might either bless us or haunt us tomorrow and that includes also what goes into our trash bin!