Showing posts from May, 2010
Show all

* Why can't Pizzas just be Pizzas?? 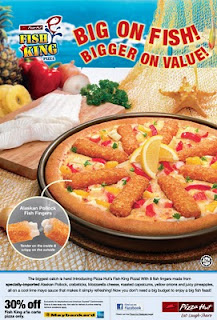 I don't think I speak this way because I'm pregnant and food just becomes difficult for a pregnant woman, but seriously what's the deal with Pizza Hut's promotions on their junky pizzas? Have they seriously gone out of their mind? Their latest Fish King Pizza with 8 fish sticks with crab sticks, cool lime and mayo cream in a pizza? Is this supposed to be a pizza or what? Not enough when you do eat their pizzas, with just one bite of the slice, the entire cheese topping rips itself off along with that bite, can you imagine this weight as a topping coming off altogether? What's next? Nasi Lemak as a pizza topping? Side choices would be sotong sambal, telur goreng or ayam rendang in mozzarella cheese? Good Lord!!! The Italians should have copyrighted their dish!!
Read more

Boys! Boys! Boys! They never really do grow up! Yesterday I had a couple of hours out with my family in a mall where my brother was selling off his camera and my son was making me buy him a Marvel Hero collector's toy. What's the difference here? Both these boys indulging in what they call their toys! No matter how old a boy gets, there will always be some gadget or another to make them go "GAGA" over and believe it or not, some of it, can be as pricey as millions! They start off at such a young age, and never do grow out of it. Collecting cameras, watches, caps, action hero toys, coins, cars, bikes, and so many others that some are so unimaginable. Spending so much of their time and money on it, to have it with them for some time and then to sell it off with profit of course to another collector and now with the technology of the Internet, they pretty much know where to find people of similar interest to do business tradings with on these toy
Read more

- May 03, 2010
I like to watch the 'humour' that takes place around me especially when it's to kill time waiting for something; like today while waiting for my medication at the A&E of a private hospital. Sitting with my son, shivering away in the air con with my fever, I couldn't help but watch this lady who dropped her mother, child (patient) and maid off with almost 4 paper bags of things, and had a little quarrel with the security guard as to where she wanted to park her c200 Merz! After much telling off, she finally decided to move her car from the entrance of the A&E and still broke the parking rules and parked at a NO PARKING area of the drop off only zone. Then she gets into the A&E, writes the name of her child on the paper for admin purpose, looked around the A&E like she somehow owned the place, gave a million instructions to her poor over bagged maid, and decides to turn to the receptionist and screams "WHY AM I WAITING FOR SO LONG?" (Barely
Read more
More posts